As an Amazon Associate, Hip2Keto earns a small commission from qualifying purchases in this post. Read our full disclosure policy here.

Which brand makes the best frozen keto pizza? We taste tested to find out. 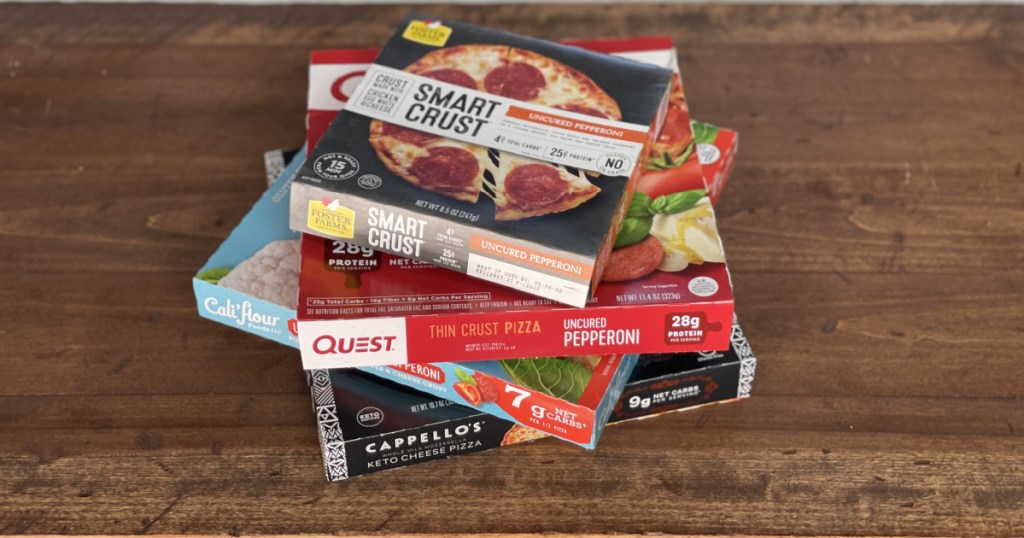 Have you tried any frozen keto pizzas?

With the popularity of the keto diet rising, it’s no wonder we’re seeing the frozen pizza market do its part. I recently scoped out the frozen pizza aisle at my local grocery stores to see what they had to offer.

I found four brands capitalizing on our desire for convenience. Depending on which grocery stores you have in your area, you might be able to find the same frozen pizzas and/or possibly different brands too.

Keto frozen pizzas are definitely more expensive than their non-keto counterparts. These were about $6.50 to $13 per pizza. 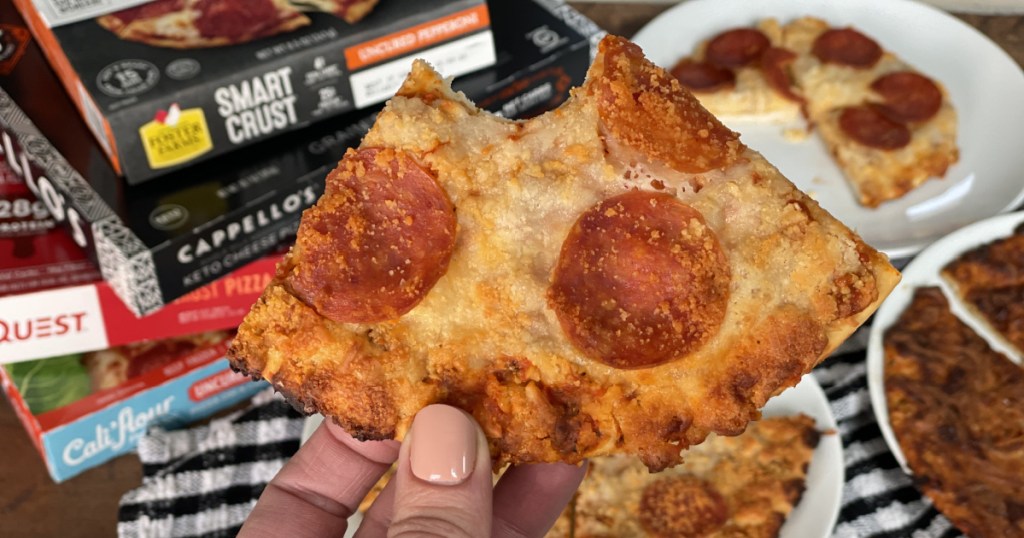 If you’re looking for an easy keto meal, frozen keto pizzas are a great option. I wouldn’t recommend eating them on a regular basis though. They fall more into the “dirty keto” category, and they are, after all, still a frozen pizza.

Of the four pizzas I tested, the serving size was half a pizza for each. The net carbs varied from 3 to 9 grams. I was actually impressed with the protein content of all the pizzas, which was 22 to 28 grams per serving. But the calorie content is what really threw me. For half a pizza, the calories were anywhere from 260 to 520 calories! Not too bad for pizza! 🍕 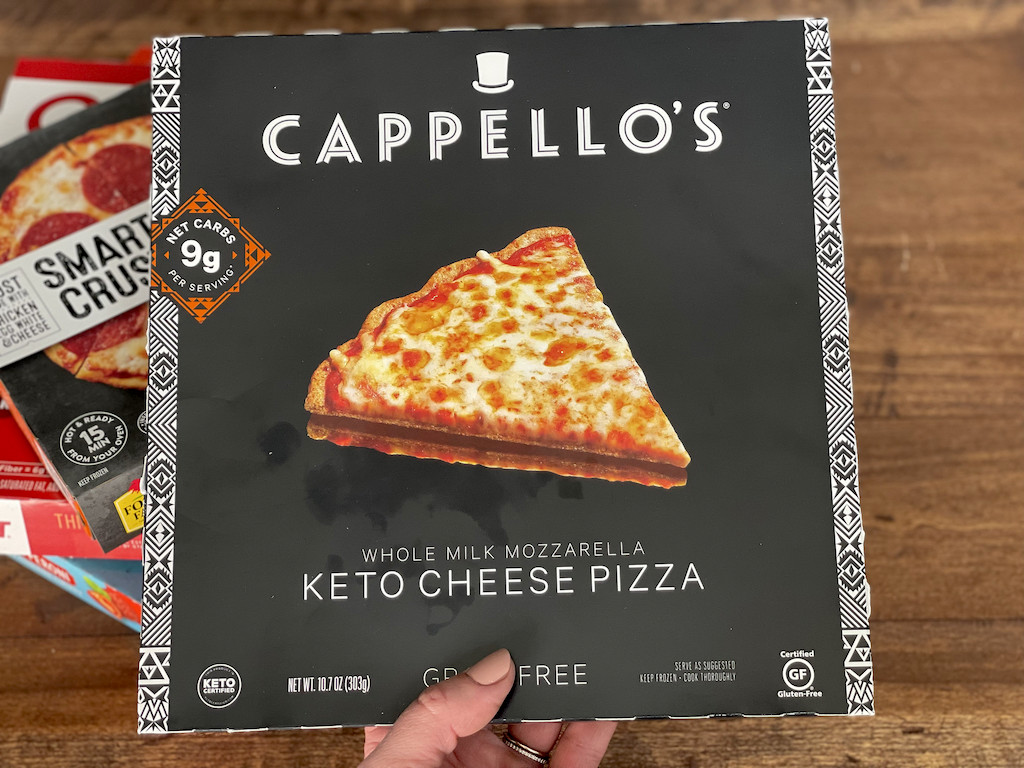 I tried to get all pepperoni but Cappello’s doesn’t make a pepperoni pizza so I opted for just cheese instead. With that being said, I did find all the pizzas to be very filling!

Which is best? Let’s take a closer look at each of the frozen keto pizzas: 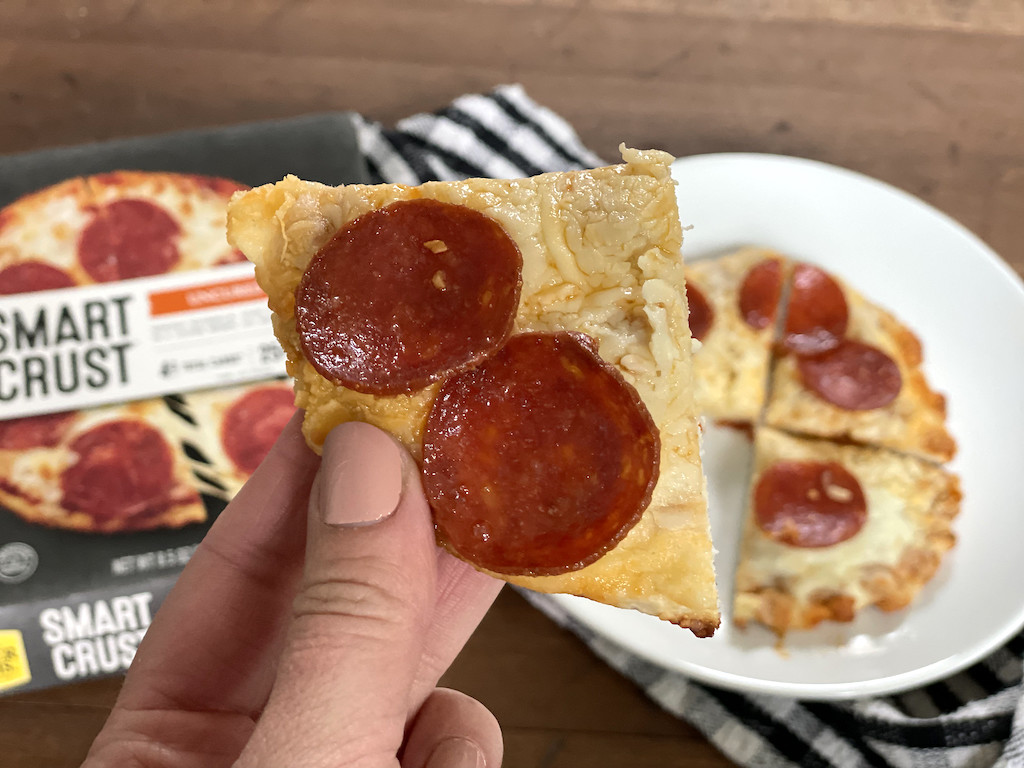 Find it at Kroger, Albertsons, and Ralphs for $6.49

This pizza was pretty tasty but it’s definitely like you’re eating a chicken patty with pizza toppings on it. If you’re a chicken lover, this one might be for you! It’s smaller than the other pizzas, like a kid-sized portion, but don’t let that fool you. It’s loaded with protein and overall includes fairly clean ingredients.

With only 3 grams of net carbs per serving, it’s a win on the keto front! 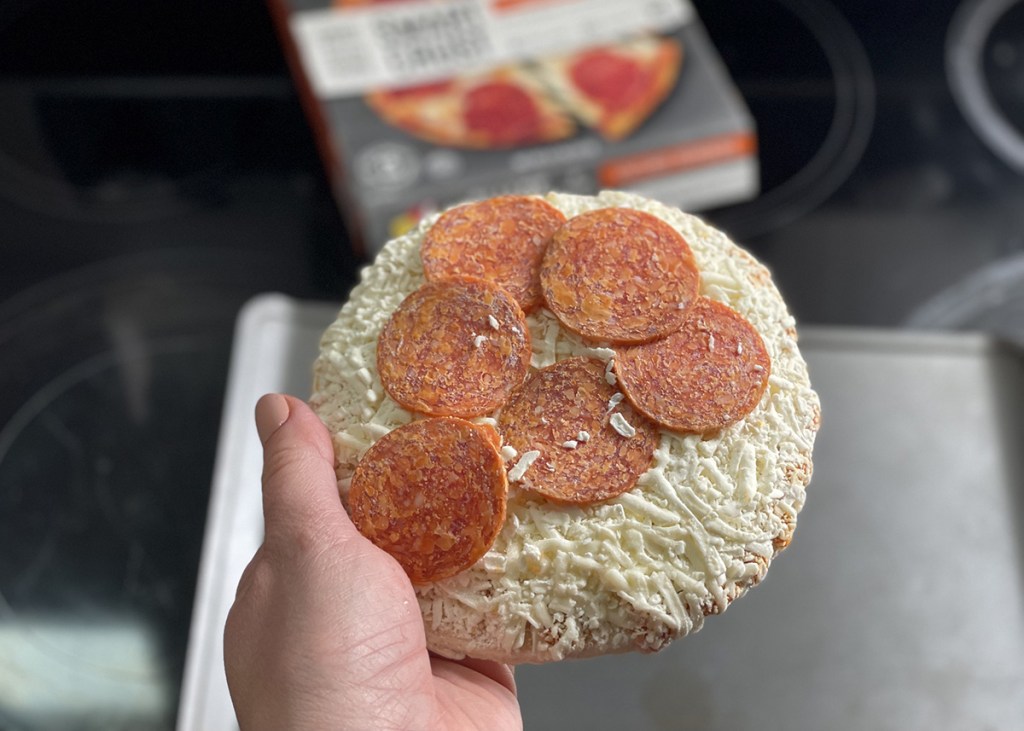 Crust: This little pizza has a crust made of chicken breast, egg whites, and mozzarella cheese. 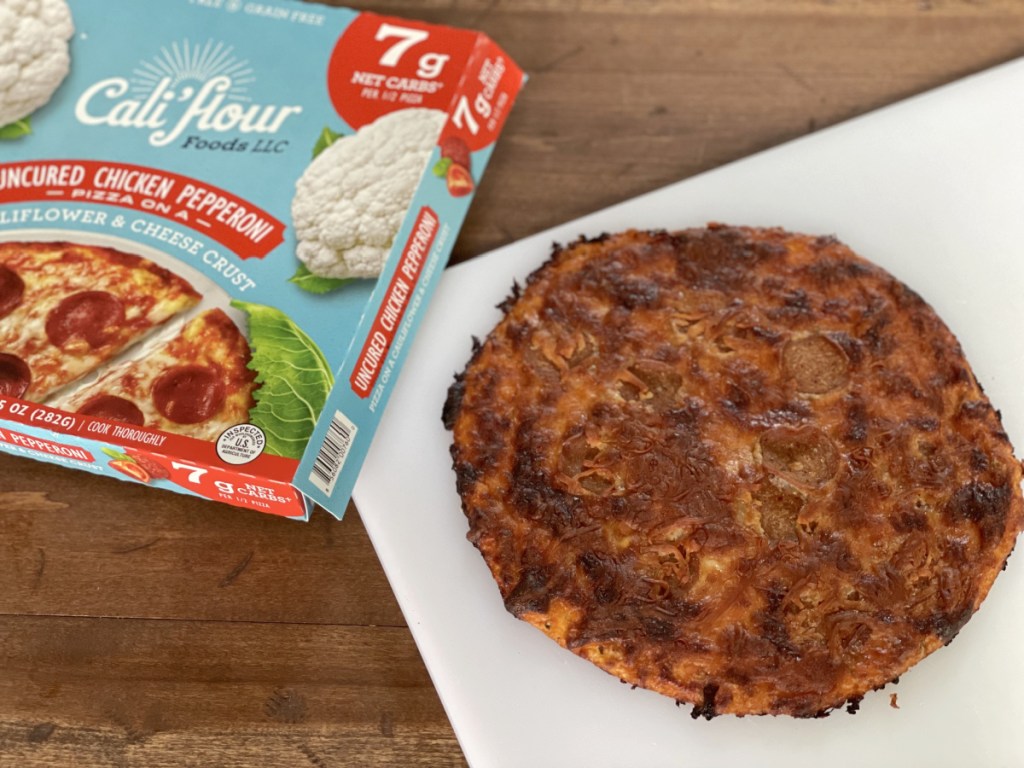 Find the 4-pack on Amazon or at Califlourfoods.com for $48. Check out their store finder too!

I really wanted to love this pizza. It has high-quality ingredients and looked super yummy. But the crust did not hold up! It was floppy and tasted a lot like cauliflower. I actually tried this pizza more than once because I wanted to give it another chance, but the same thing both times I cooked it. The crust needs more structure.

It comes in at 7 grams of net carbs per serving, which does still make this a good keto option. 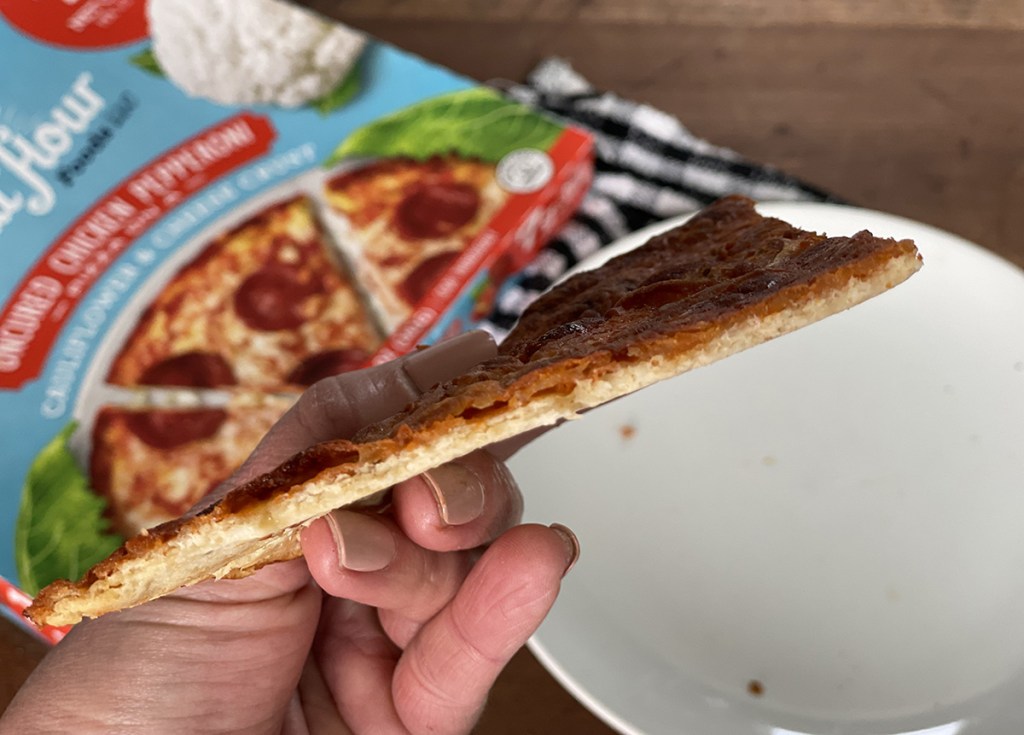 Crust: This crust is made from just cauliflower, mozzarella cheese, and egg whites. 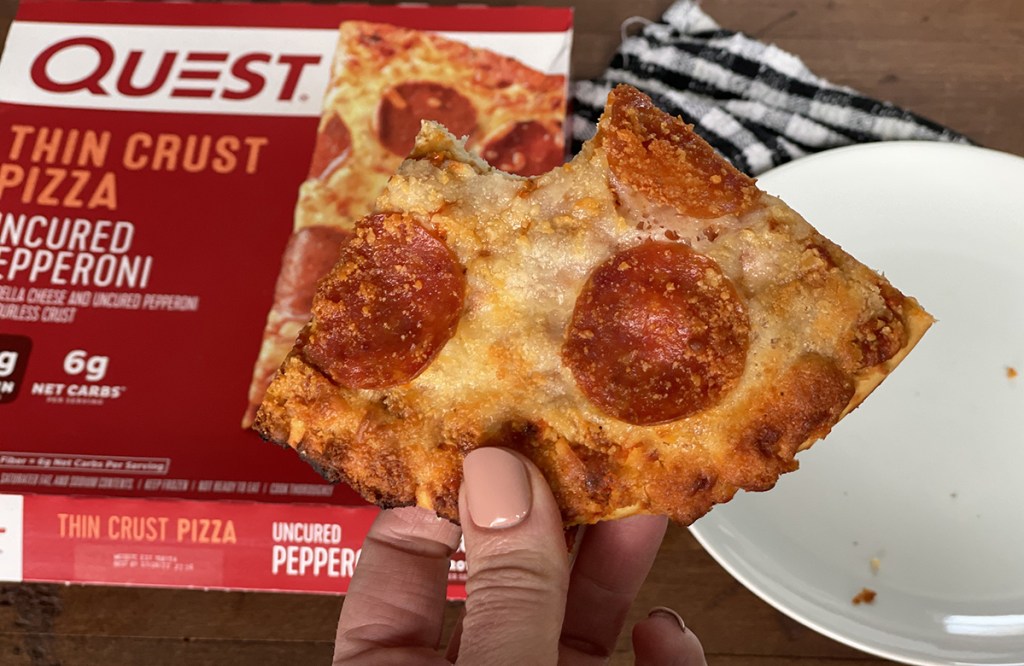 Find it at Walmart, Target, and other retailers starting at $7.48

When I was researching frozen keto pizzas, I came across this one from Quest. I like Quest’s other products so I was excited to try it. It has the highest protein content of all the pizzas at 56 grams for the whole pizza! The crust is the closest to a real pizza dough out of all the pizzas. I also felt that this pizza had the best ratio of toppings with the sauce, pepperoni, mozzarella, and romano cheese.

The net carbs are 6 grams for half a pizza, which is awesome. They did add a lot of fiber to the crust though. Total carbs are 25 grams and then there are 19 grams of fiber to make the net carbs 6 grams. I have a somewhat sensitive stomach, but didn’t have any issues with the fiber. Big win overall! 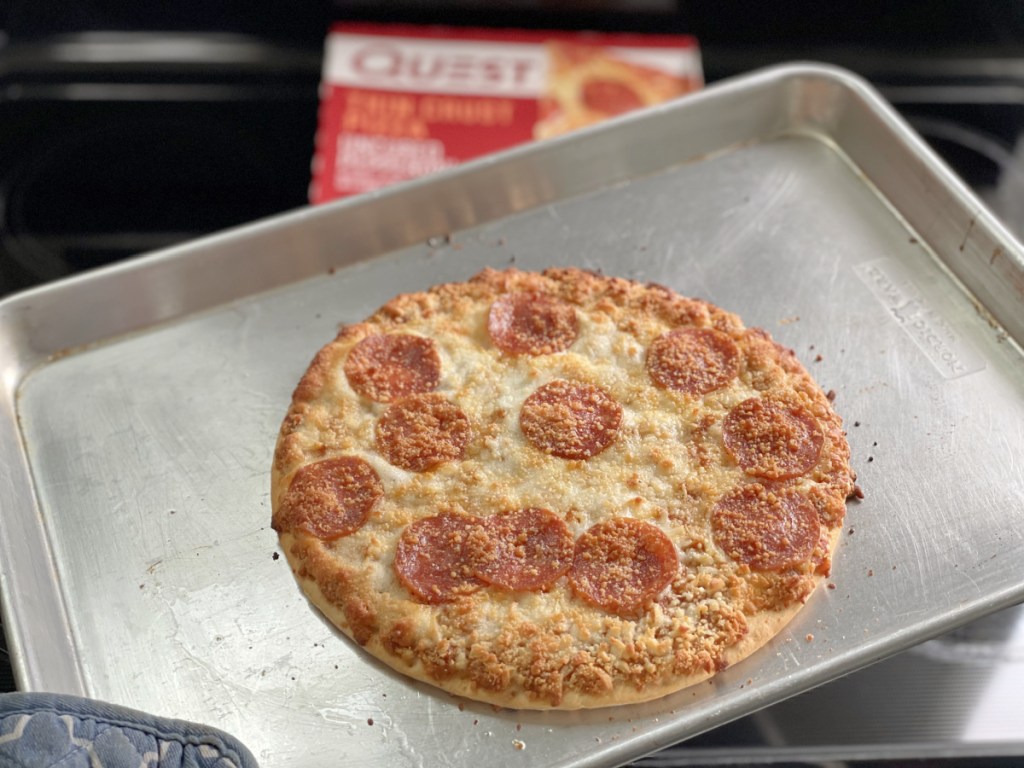 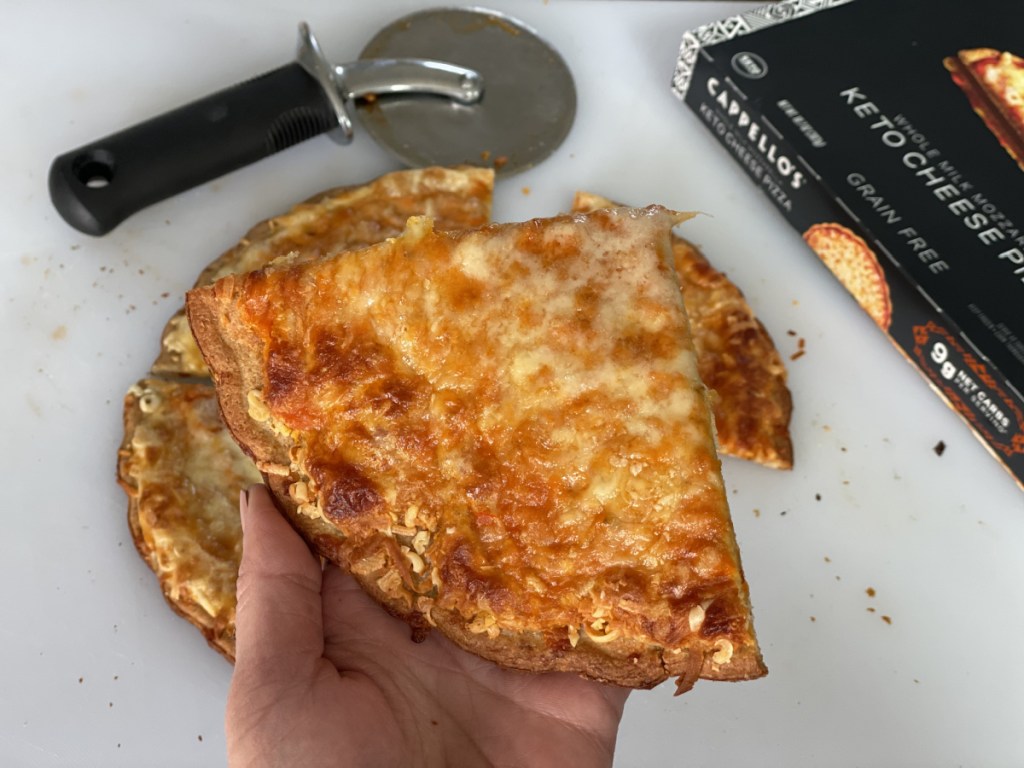 Find it at Whole Foods, Kroger, or on Capellos.com for $13. Check out more retailers that may carry Capello’s keto pizza!

Using turnips in pizza crust is an interesting idea. I wish I could say that it’s good… but it’s not. I wasn’t the biggest fan of this pizza. It has super clean ingredients but the crust was dry and the toppings were lacking. This frozen keto pizza was also the highest in calories and carbs and the most expensive. 🤨

At 9 grams of net carbs per serving, this pizza isn’t worth the price tag. 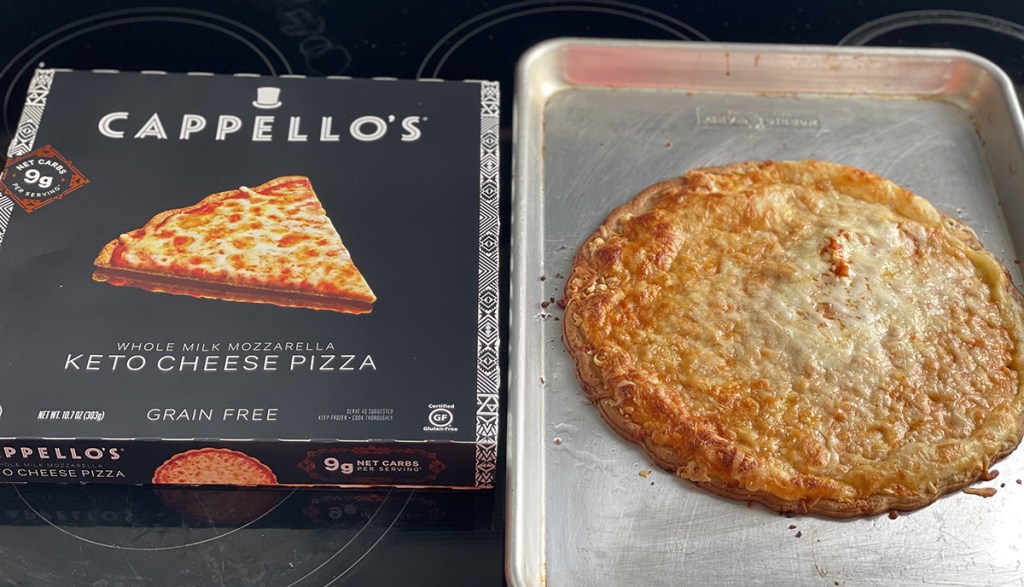 Crust: This crust is mostly made from turnips, almond flour, eggs, mozzarella, and flaxseed. 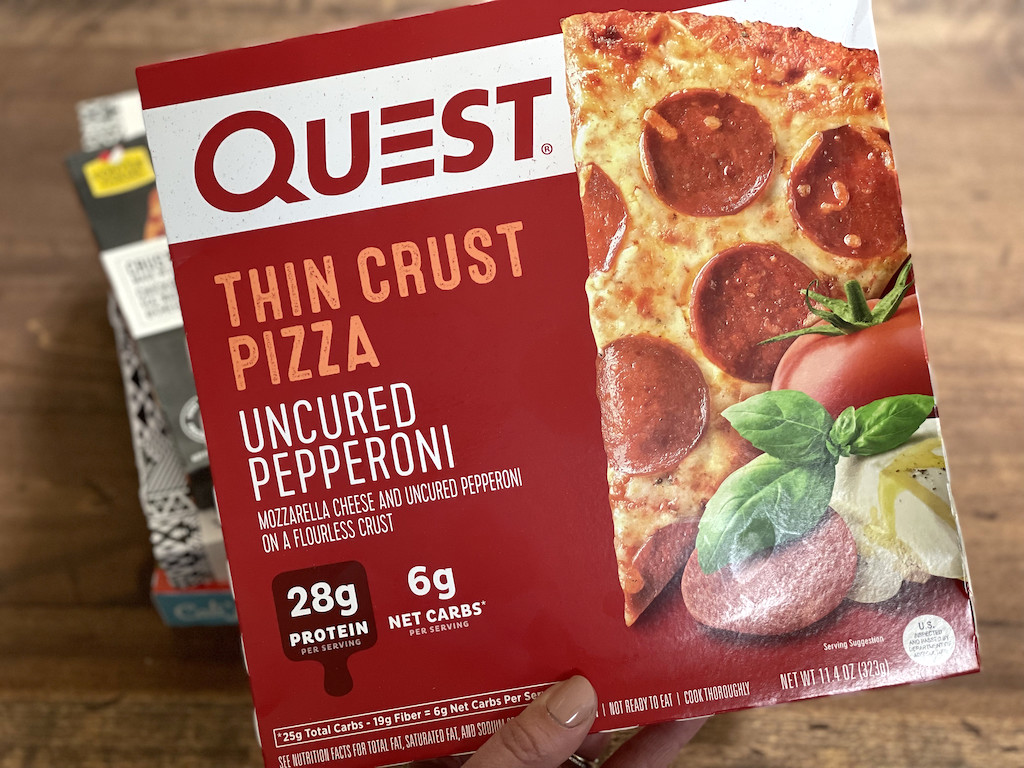 So which frozen keto pizza was my favorite? Quest for the win!

I love pizza, so it was fun to test all of these! As mentioned above, I tried to get all pepperoni but the Cappello’s doesn’t make one, just a cheese pizza. When cooking them, I followed all of the directions exactly. And I kept in mind that these are frozen pizzas, which means they’re on a different level than fresh or homemade pizzas.

But overall, Quest took home the trophy as the best keto frozen pizza! 🏆

Have you tried any of these or found different brands? What’s your favorite? Let us know in the comments!

Want to make your own keto pizza instead? Check out our Fathead dough recipe!