The Salt Fix Review, Part 1 | Why The Experts Got It All Wrong 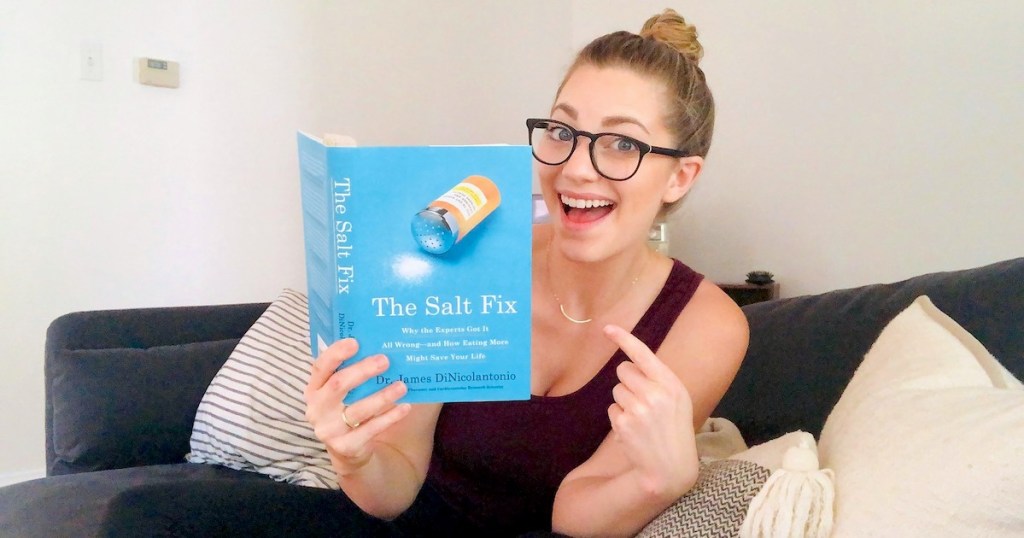 The Salt Fix book will change how you look at this perfectly white crystal. If we eliminated all sodium from our diet, we would die. Period.

While I already knew this statement was truthful (to an extent) I never thought that restricting salt (like many doctors still recommend today) would actually do damage to my body, simply because of what mainstream media has taught us to believe is “healthy”.

And the truth is… more salt is better.

If you haven’t already, sign up for our Hip2Keto Book Club now & dive into reading with us! 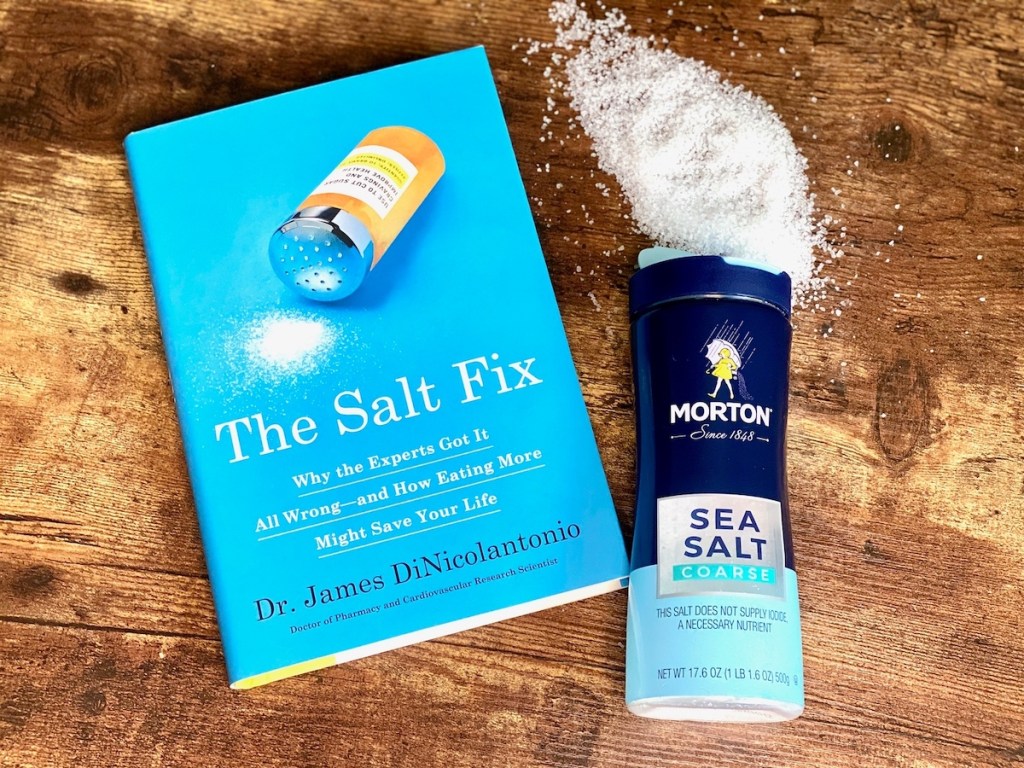 I, like many other Americans, have been taught that salt is bad for you, specifically that it causes kidney disease, high blood pressure, and ultimately puts you at risk for obesity and heart disease (two of the leading causes of death in the United States) among many other complications…

But the facts prove that couldn’t be further from the truth.

In fact, no studies have even shown conclusive or undeniable evidence that salt is bad for humans or that it even raises blood pressure at all. It wasn’t until the deadly rise of the sugar industry that researchers started pointing a finger at salt. 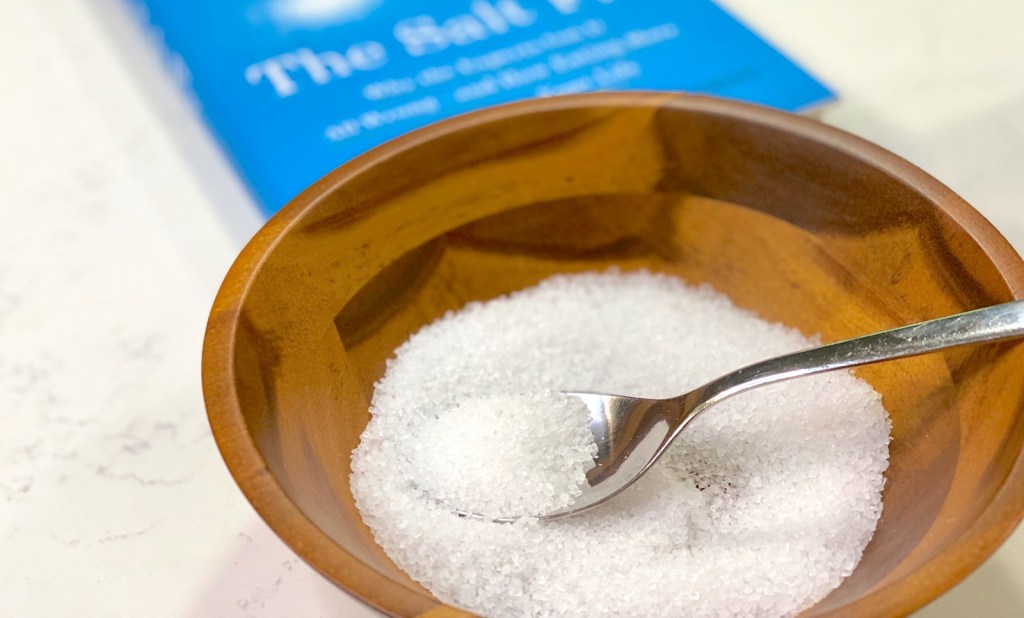 I’ve never been one to put excess salt on my food for this very reason. I also was led to believe, as many of you, that salt is an unnecessary food additive and not something we need in our daily diets – hence the bolded disclaimer on so many foods today.

Scary enough, a low-salt diet is still something many old school doctors are continuing to practice and preach today.

Which leads me to ask… why do our bodies even need salt? 🤔

Clearly, salt is crucial, friends. So why does it have such a bad rep?! 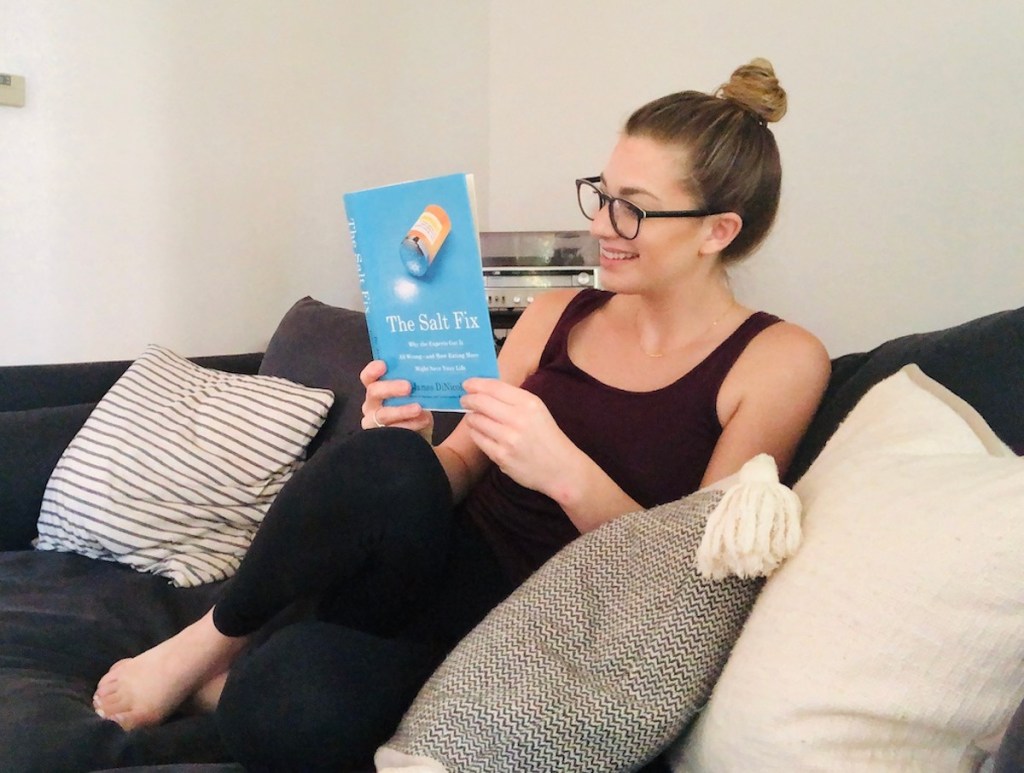 If you didn’t get a chance to read chapters 1-3 of The Salt Fix yet, here’s what you need to know:

In part 1 of The Salt Fix, Dr. James DiNicolantonio, takes a deep dive into the evolution of our genetic make-up, referencing the first four-limbed vertebrates (Tetrapods) to dissecting what prehuman primates and even early humans daily diets consisted of. And you guessed it, their diets were rich in sodium.

In fact, since the first-ever living creature on the planet, we’ve been bathed in salt and our bodies couldn’t be more equipped to handle it – even today.

Fun Fact: Did you know that our kidneys naturally process more than the daily recommended amount of salt in our diets in just 5 minutes? 😳 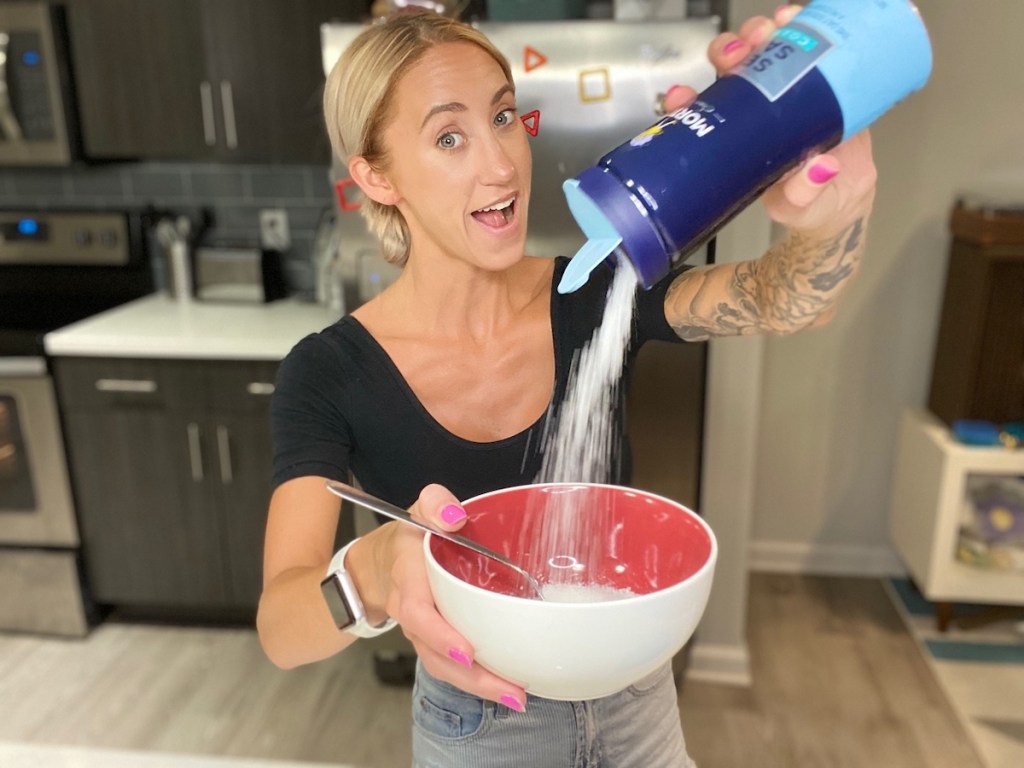 You’ll find salt in every place in the world (the ocean makes up 99% of the Earth’s total living space) – plain and simple, it’s a crucial staple piece to all forms of life. In fact, fast forward millions of years later (today) and you’ll learn that the makeup of our human body fluids still mimics that of the ancient ocean.

Not to mention it’s dire importance to all other life forms:

“A yen for salt drives the elephants of Kenya to walk into pitch-black caves of Mouth Elgon to lick sodium sulfate off the cave walls. Elephants in the Gabon who are deprived of salt uproot entire trees to get at the sodium-rich soil under the roots.

Even gorillas have been known to follow elephants to eat the salt-rich soil and chew on rotting wood, to eat the salty microbes. Monkeys that groom one another don’t do so to eat fleas, as is commonly presumed – they do it to eat each other’s salty secretions.

Many animals participate in puddling to get salt from soil and will even drink urine to obtain salt. Papilio polytes, a type of swallowtail butterfly, has been found to drink seawater at low tide to help meet salt requirements.”

If that’s not powerful information that will make you think a little deeper about salt, I don’t know what is! Case in point, we are one with the ocean (and salt) and we all need it. Most likely more than you’re probably consuming on a daily basis now. 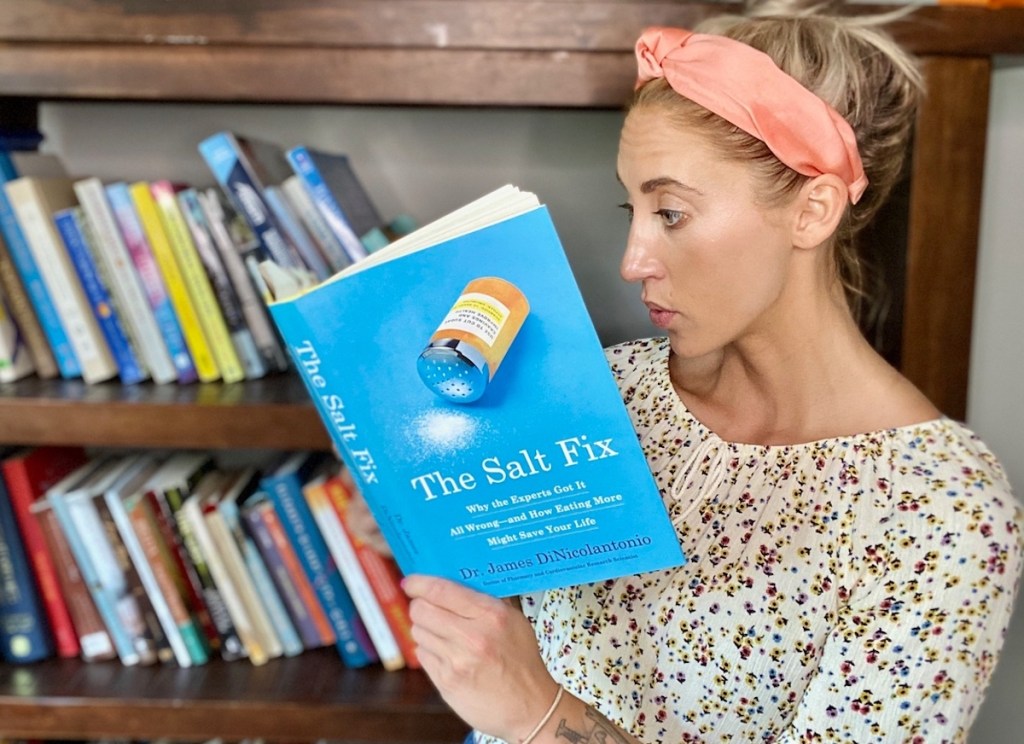 As we dive deeper into Part 1 and get into chapter 3, Dr. James DiNicolantonio shares studies conducted on salt and proves that the outcomes were majorly influenced by the large sugar corporations and even original claims and old beliefs about “salt being bad” that never actually had any research or proof to back it up.

We’re starting to learn here that the true culprit isn’t salt, it’s sugar, which we could live our entire lives without any added to our food, to begin with. But salt, we need time and time again. Proof that mainstream media and large money-driven industries have influenced our beliefs of both salt (good for you) and sugar (bad for you).

Here are our key takeaways from The Salt Fix, Part 1 that you’ll want to remember: 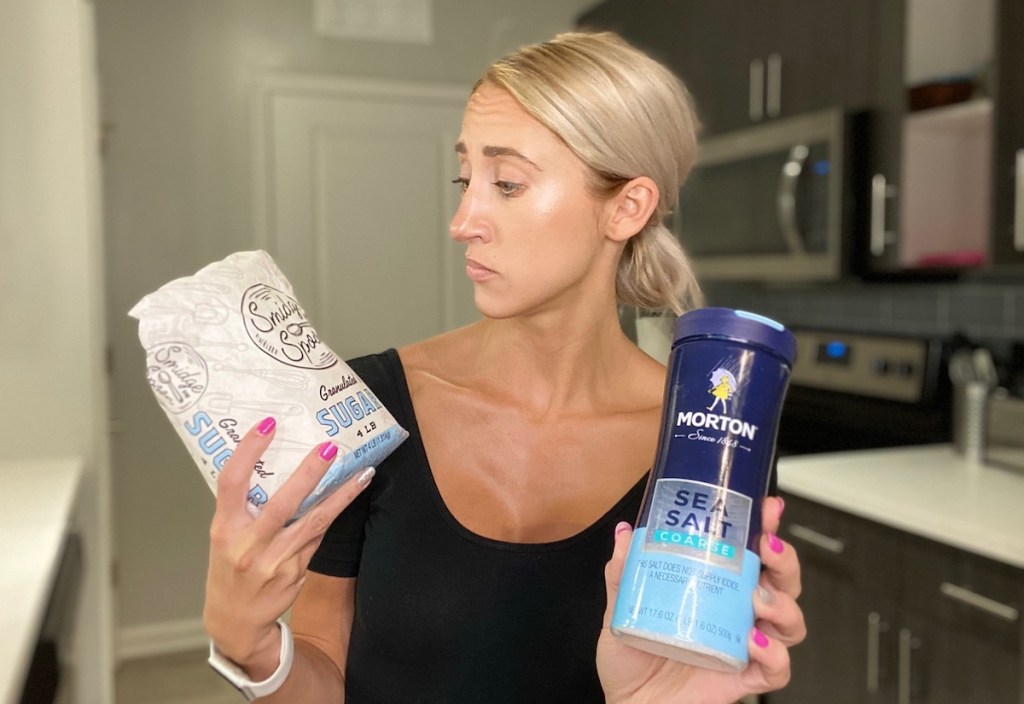 “Your body drives you to eat several grams of salt (around 8-10 grams, equal to 3,000-4,000 milligrams of sodium) every day to remain in homeostasis, an optimal state in which you put the least amount of stress on the body. But you could literally live the rest of your life – and probably a much longer one – if you never ingested another gram of added sugar.”

“Think about it: no one would think to recommend an intake of calcium or vitamin D that is a minimal amount of live.”

“Instead of ignoring your salt cravings, you should give in to them – they are guiding you to better health.”

“A low-salt diet seems to act like a natural contraceptive in both animals and humans, and in both males and females. A low-salt diet causes a reduced sex drive; reduced likelihood of getting pregnant; reduced litter size (in animals) and weight of infants; and increased erectile dysfunction, fatigue, sleep problems, and age at which women become fertile.”

“We cry salt, we sweat salt, and the cells in our bodies are bathed in salty fluids. Without salt we would not be able to live.”

“Scientists have observed that sodium deficiency can lead to cannibalism in insects (and probably other animals, too).”

“What had previously felt like a sledgehammer in search of a fly to smash, now began to hint at what we in the field have known for decades: low salt only works for a very small group of people.”

“By shifting the focus of obesity away from ‘harmful calories’ and toward ‘total calories,’ sugar was able to fly under the radar of close scientific scrutiny. And because saturated fat contained more calories per gram than sugar, it took center stage as a driver of obesity, too.”

“Old beliefs die hard – and high-salt is still blamed mightily for contributing to heart disease in the media, in doctors’ offices, and even on ‘heart smart’ restaurant menus.”

Ready to dive into part 2 of The Salt Fix?!

What Really Causes Heart Disease, We Are Starving Inside, and Crystal Rehab: Using Salt Cravings to Kick Sugar Addiction.

If you’re behind on your reading, it’s not too late to catch up! Our week 2 reading assignment is only about 50 pages over the next 3 chapters, yet it’s still packed full of pretty riveting information!

Tell us what you thought about these first few chapters in the comment section of this post or in our exclusive Hip2Keto Facebook Group. Let us know your biggest takeaways from each week’s chapters and chat with other Hip2Keto readers to compare notes.

Need a copy of The Salt Fix book?

Grab The Salt Fix hardcover, Kindle version, or audible version of the book to read along with us!

Sara is a self-taught blogger and photographer with 8+ years of experience having work featured in various building, travel, and fashion publications, most notably Bassett Furniture and Fossil. 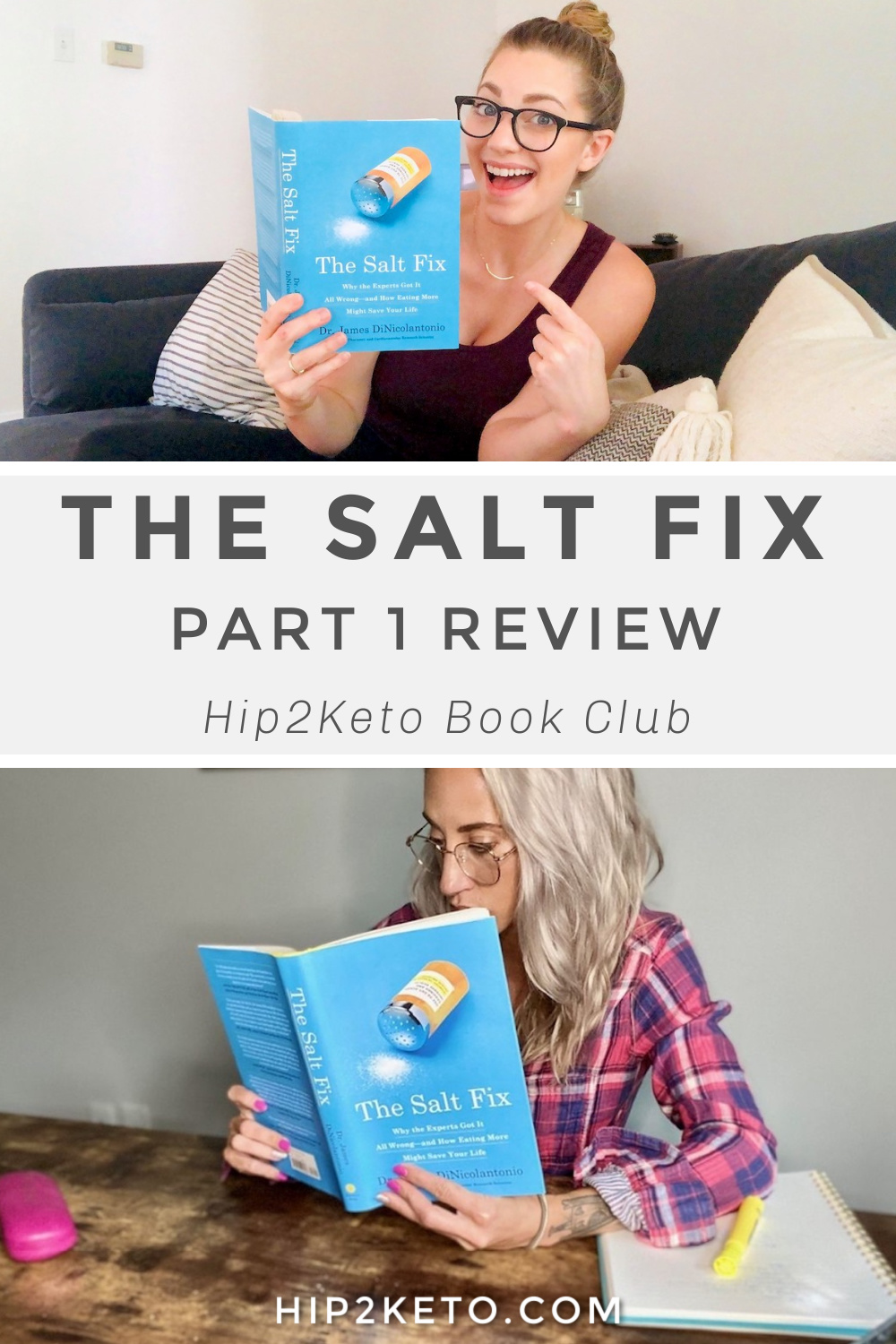