You’ve gotta try one of these keto-friendly Subway Protein Bowls! 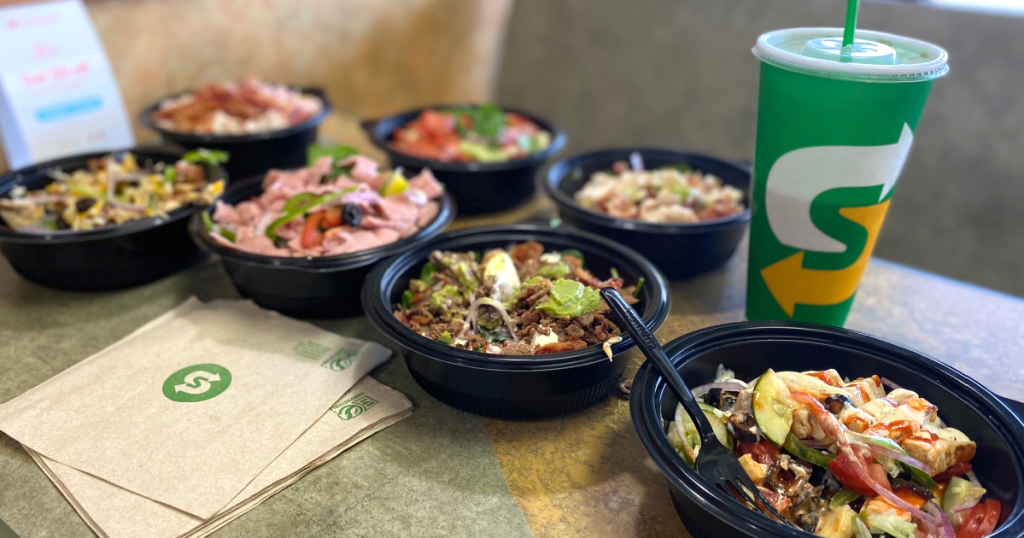 Subway is joining the long list of fast-food restaurants adding protein bowls to its menu!

Earlier in the year, Subway added Protein Bowls as a menu option, so now you can order any of the chain’s Footlong Subs in this format. They come with the same portion of protein, vegetables, cheese, and sauce as the restaurant’s famous Footlong Subs, but without all of the carbs and sugar associated with Subway’s bread! 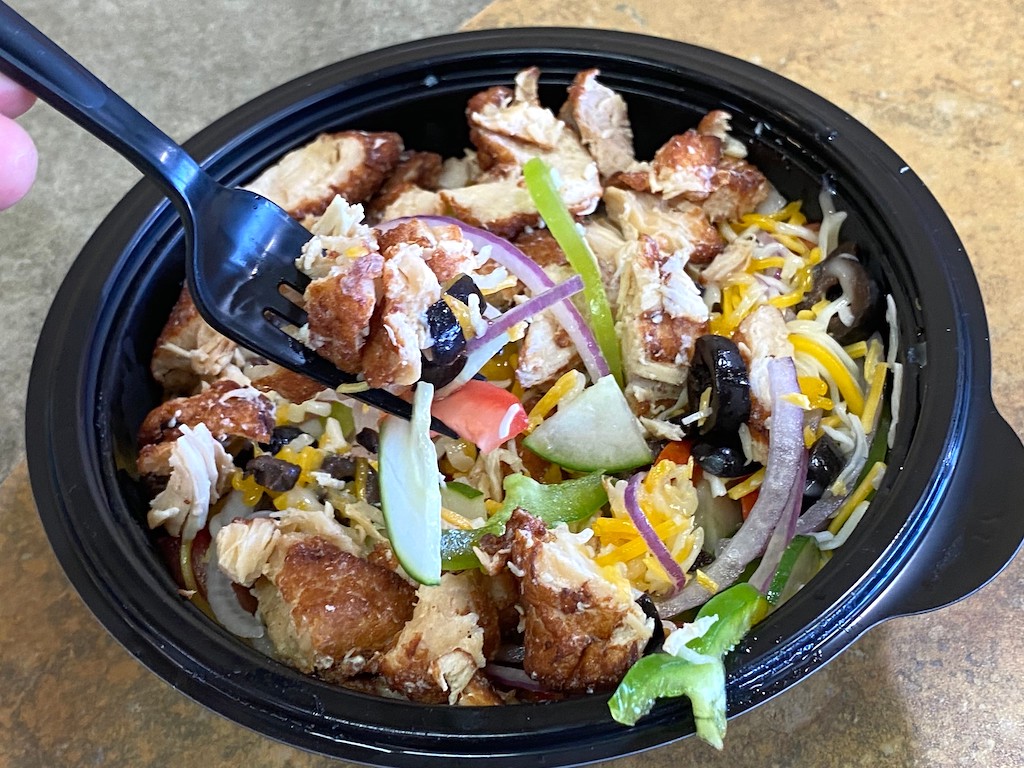 There are currently 15 Subway Protein Bowls on their menu (a.k.a. No Bready Bowls™), with 12 of them being pretty keto-friendly, giving you lots of tasty options to choose from. 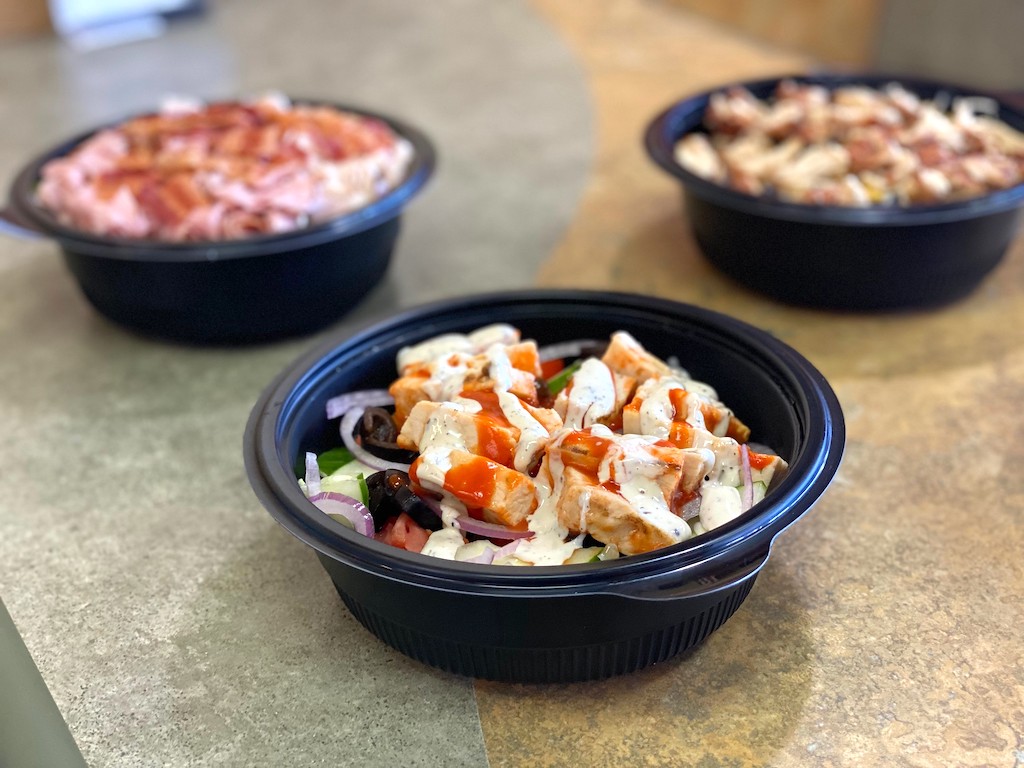 We found them priced from $6.99 to $11.99 at our location, with the option to double the protein on any bowl for just $2 more. Keep in mind that pricing does vary by location. 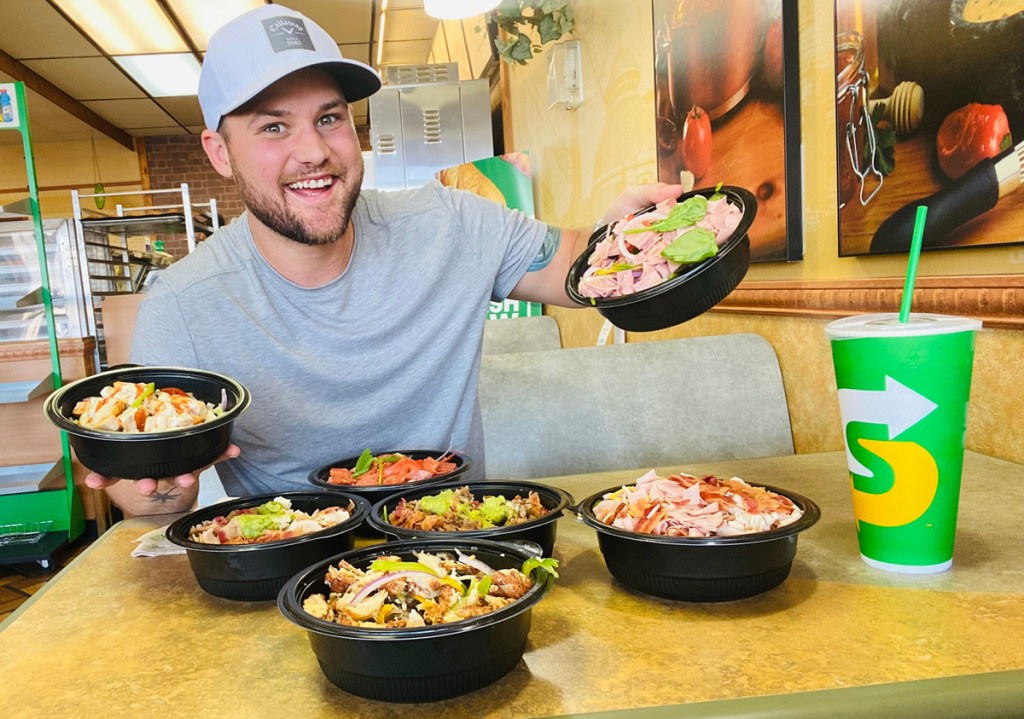 We sent a very hungry Stetson out to sample some of Subway’s Protein Bowls. The nutritional information shown reflects exactly how Stetson ordered each Protein Bowl, but Subway has a very handy Nutrition Calculator that makes it easy to see how the modifications you make to your own order will affect the final macro count of your bowl.

Hip tip: Avoid the Meatball and the Sweet Onion Chicken Teriyaki as they are pretty high in carbs.

Dig into these Subway Protein Bowls for lunch or dinner! 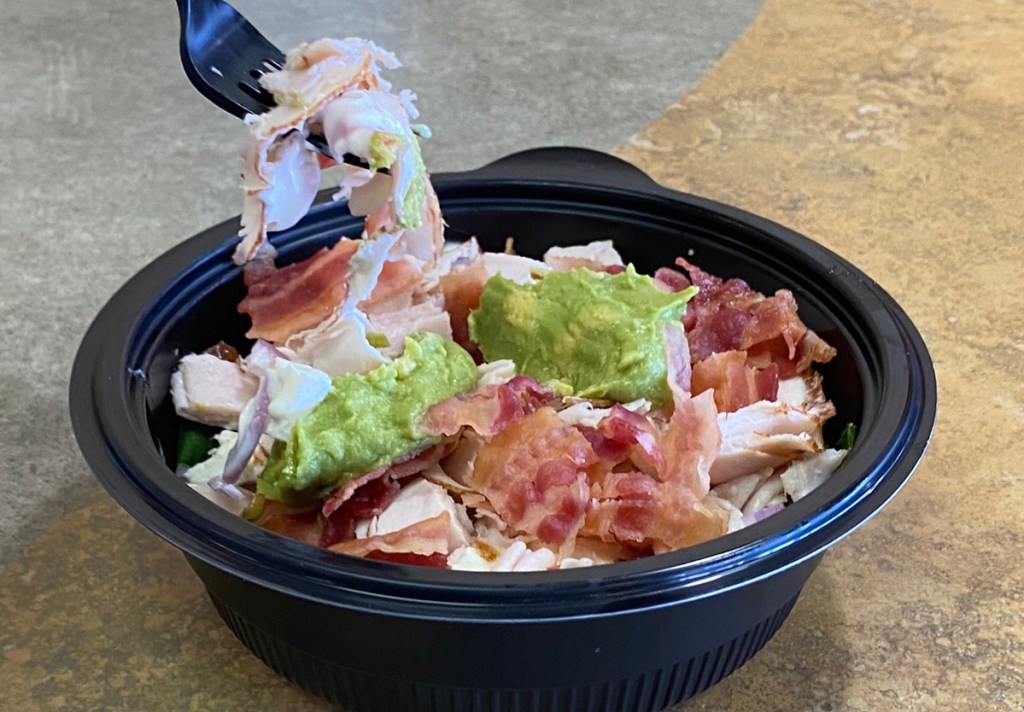 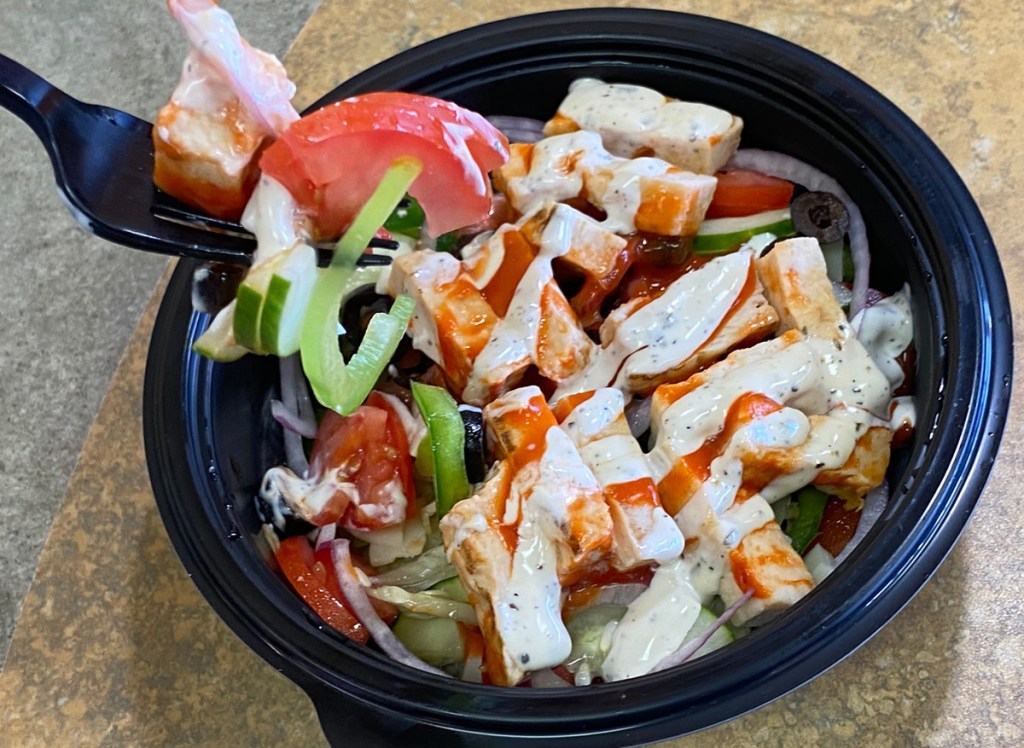 This bowl is filled with juicy rotisserie-style chicken and your choice of veggies. For this bowl, Stetson added provolone cheese, tomatoes, red onions, cucumber, black olives, spinach, and green peppers. 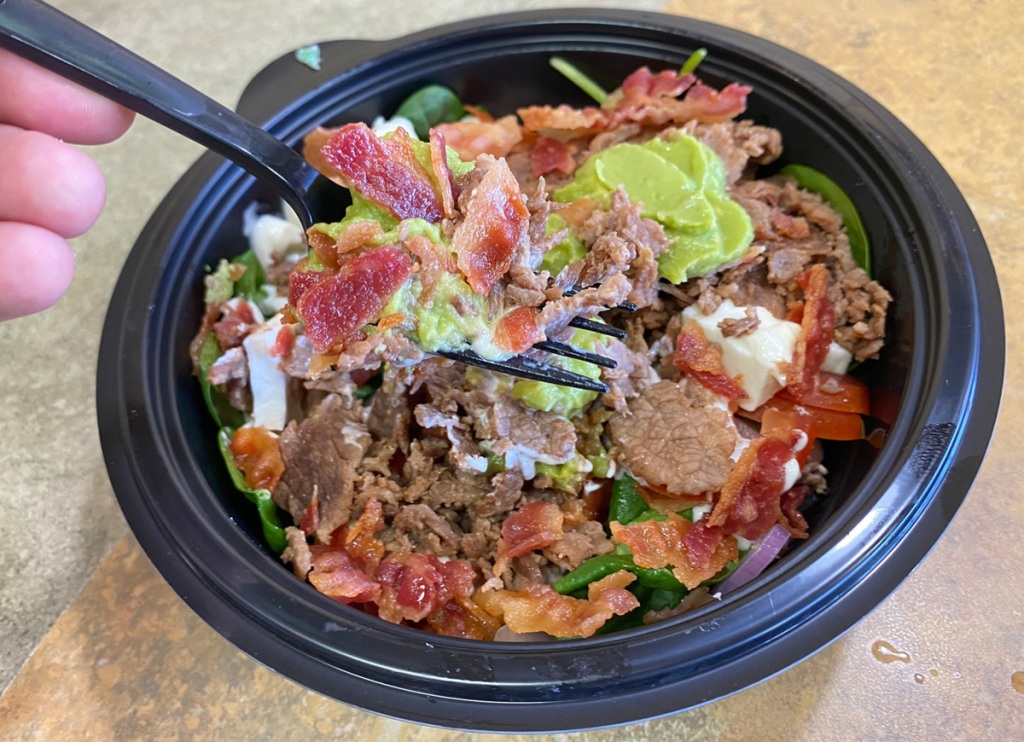 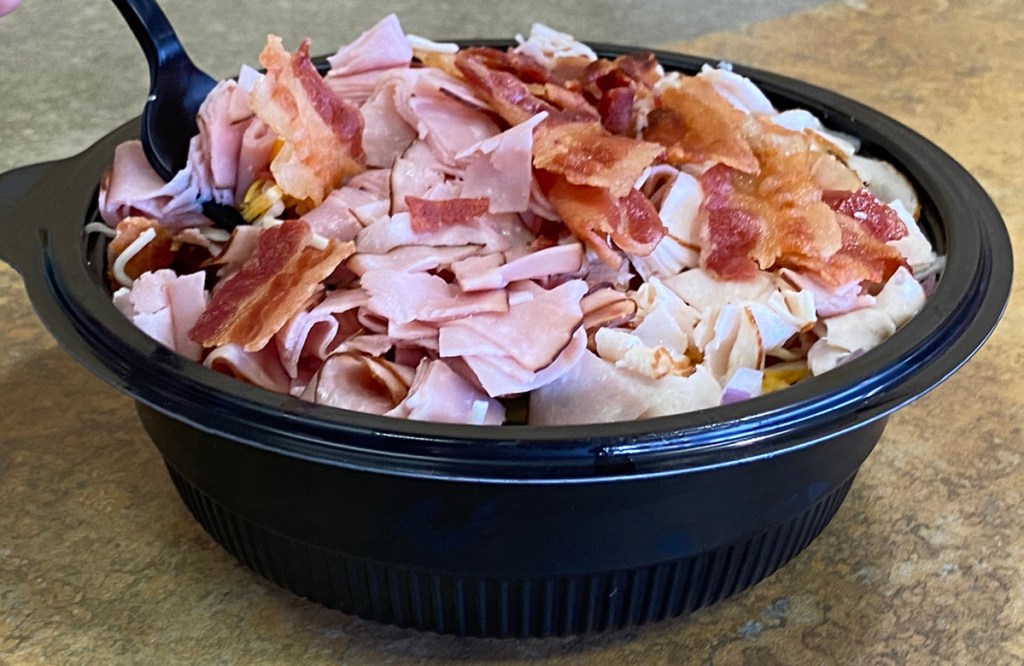 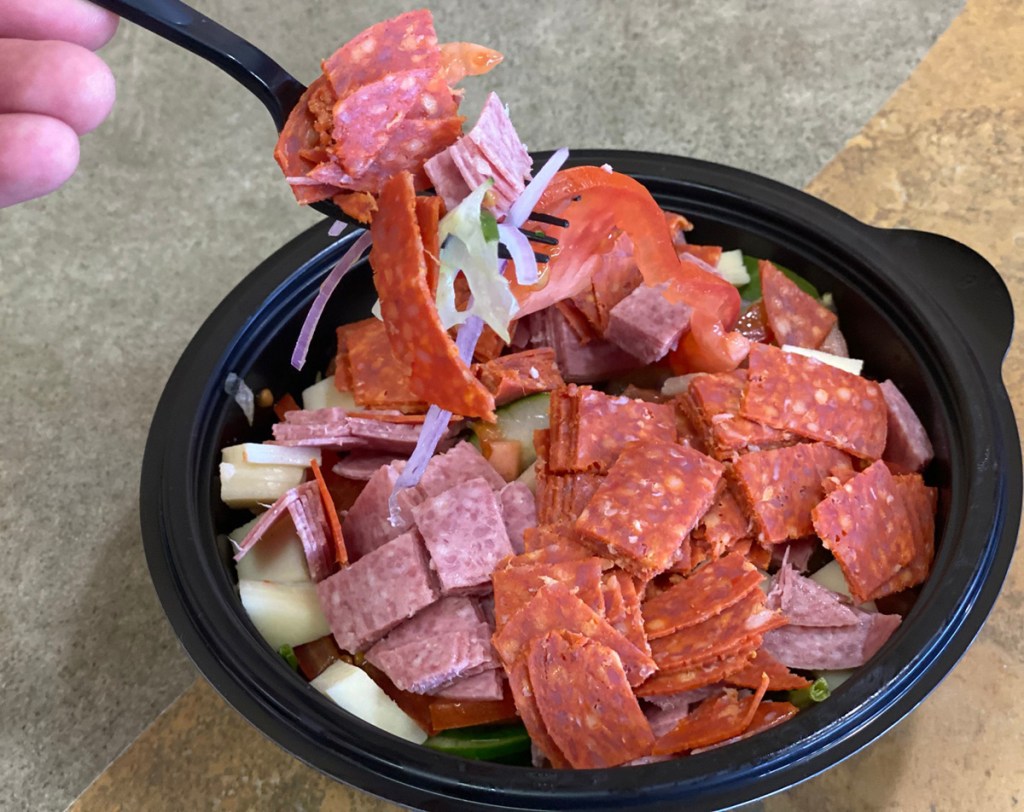 This protein bowl packs a spicy kick of flavor and comes with pepperoni and Genoa salami along with your favorite veggies. Stetson added black olives, cucumbers, spinach, red onions, tomatoes, and provolone cheese. 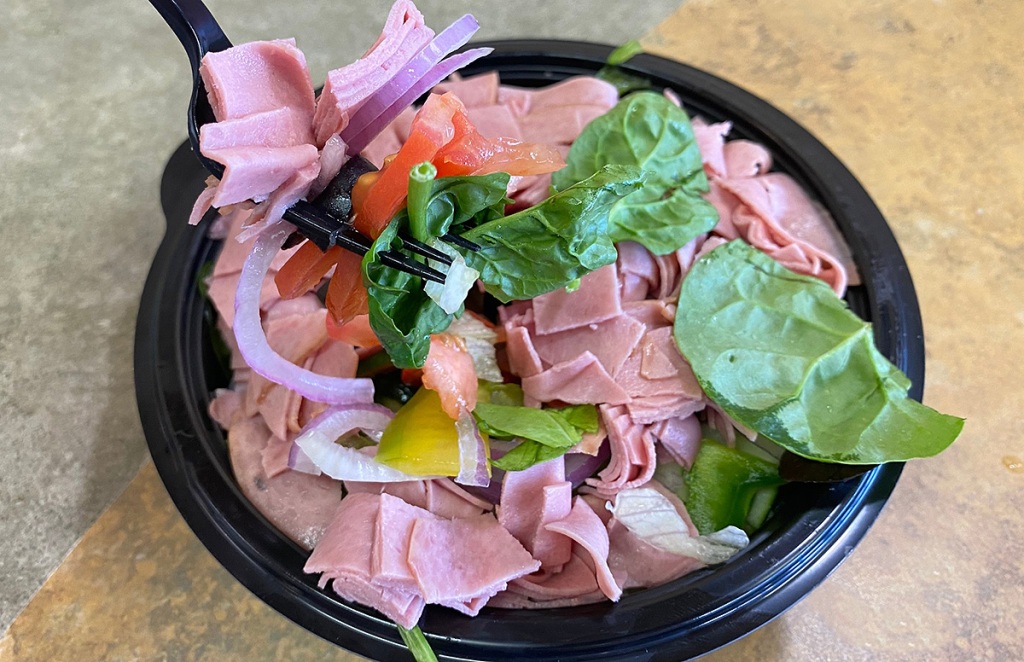 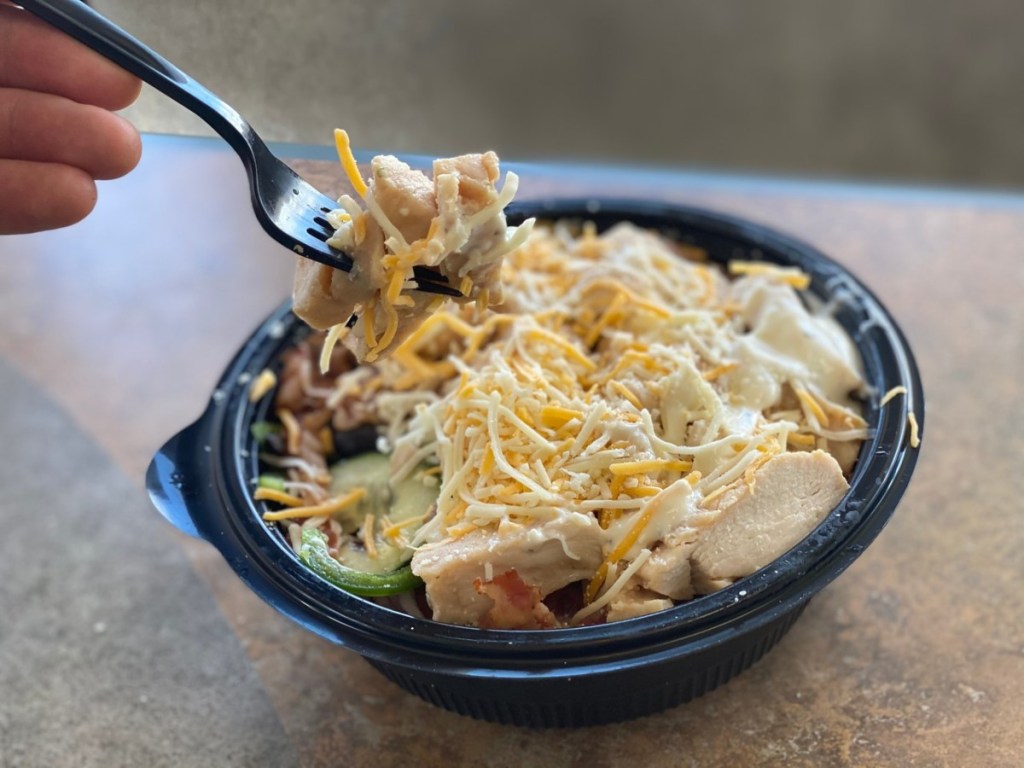 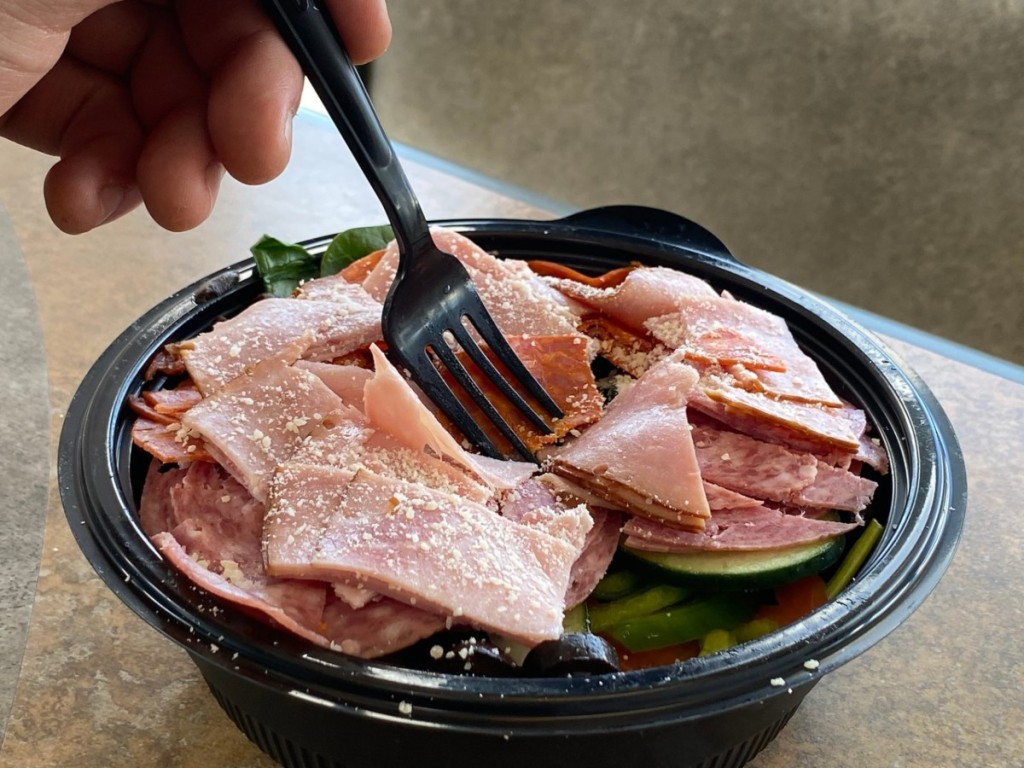 The Italian B.M.T has all the Genoa salami, ham, and pepperoni you’d find on a Footlong, cut into bite-size pieces. It also comes with lettuce, cucumbers, tomatoes, green peppers, red onions, black olives, and spinach. Stetson added a sprinkling of Parmesan cheese to his bowl. 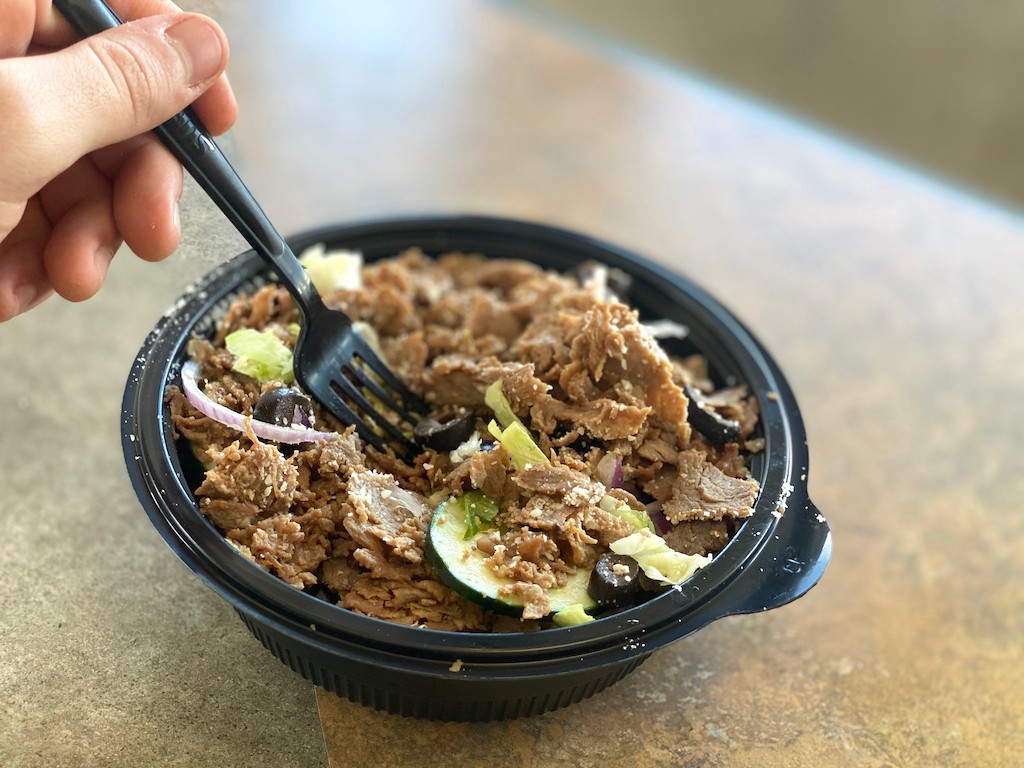 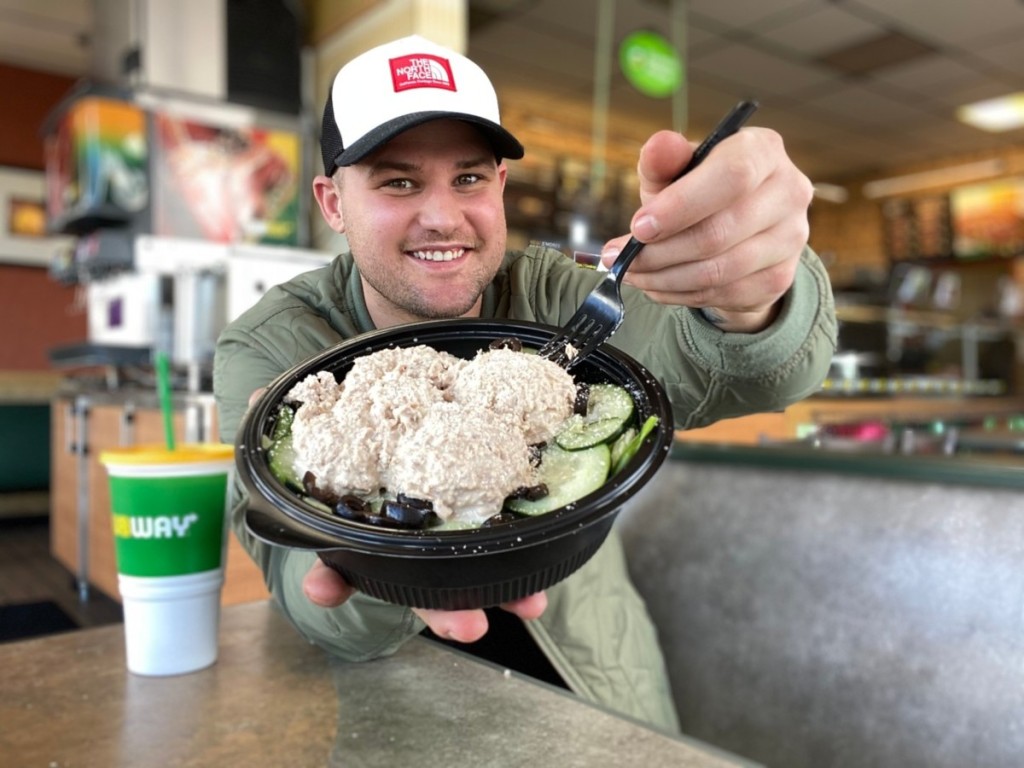 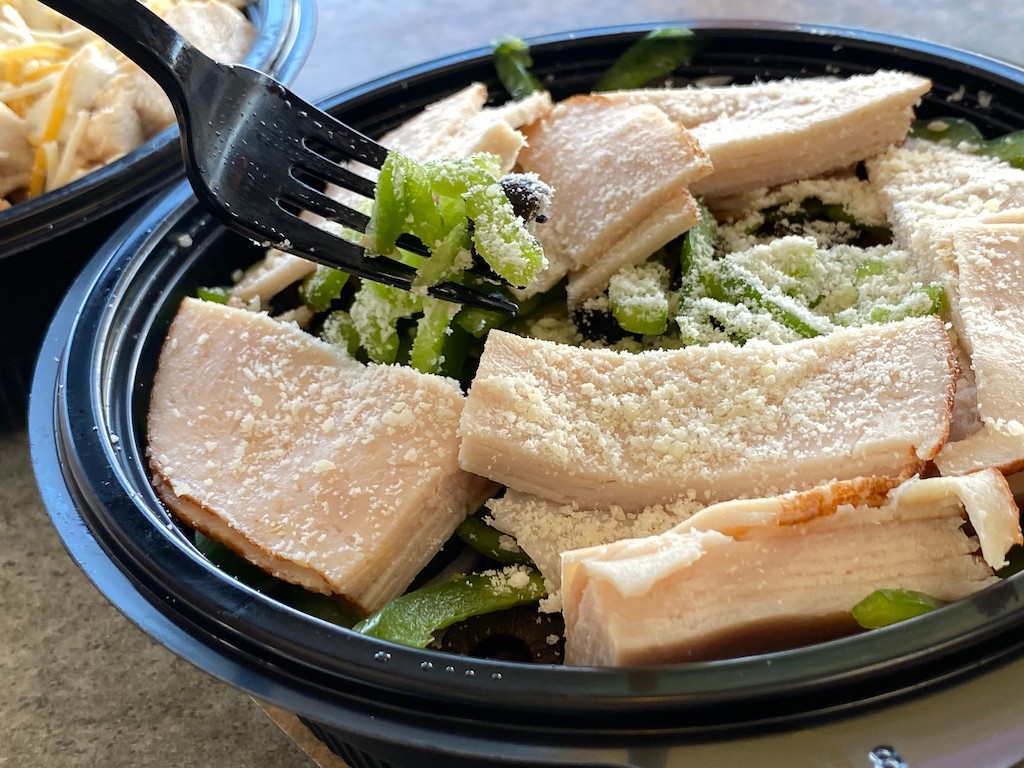 The Oven Roasted Turkey Protein Bowl comes with all the turkey breast you’d get on a Footlong sub, sliced into bite-sized pieces. It’s served on a bed of lettuce, cucumbers, tomatoes, green peppers, red onions, black olives, and spinach. Stetson ordered his with Parmesan cheese and without tomatoes. 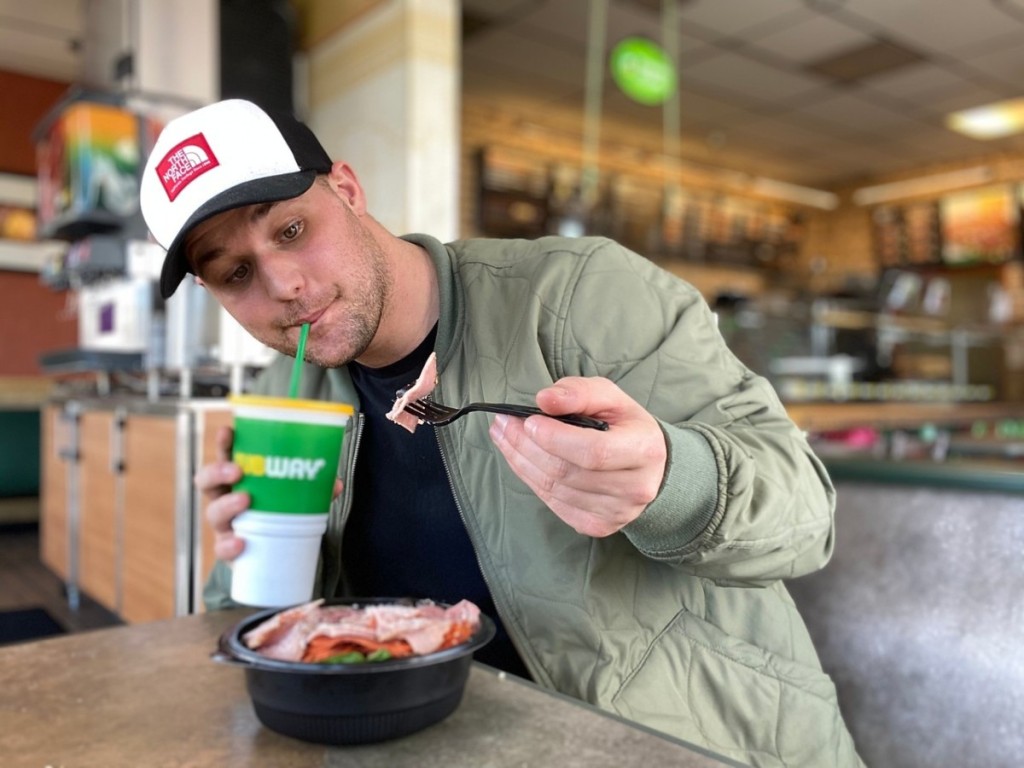 “These Subway Protein Bowls were really satisfying, and you definitely don’t need to order several of them like I did to fill up! 😆 One of these would have made a really hearty meal, with plenty of fat and protein to keep you going for the rest of the day. My favorite was the Buffalo Chicken Protein Bowl – it was packed with flavor and was so delicious!

If I’m really hungry, I might spend the extra two bucks to double the protein, and then maybe add some bacon and guacamole for extra fat.” – Stetson

Keep it keto no matter where you eat with our Keto Fast Food Guides!

14 of the Best Keto Starbucks Drinks to Order – According to a Barista! 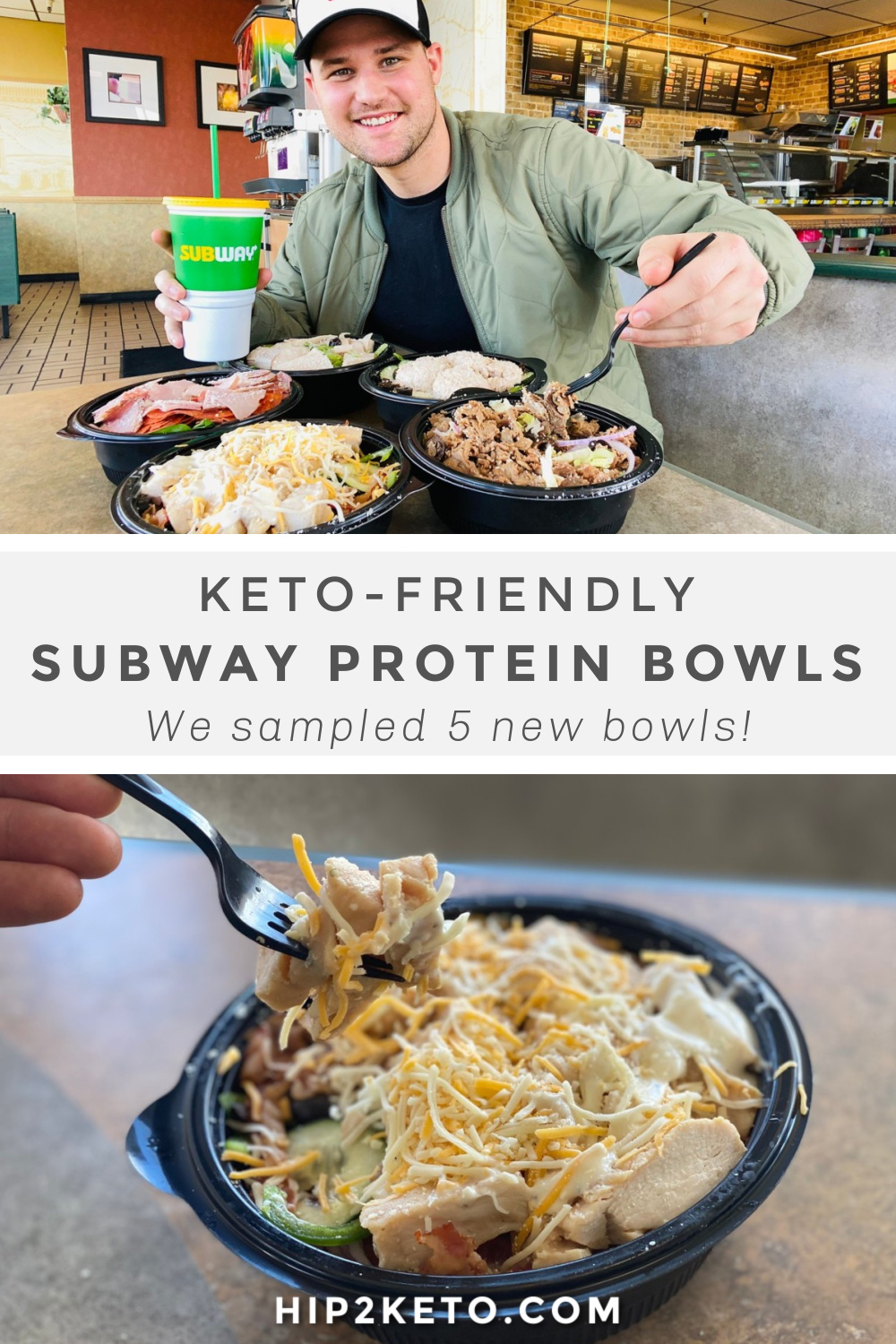